It’s no secret that app reviews have significant impacts on a business. Not only does it give you valuable feedback on where to improve, but it also affects things like:

What about revenue? How do app reviews (positive or negative) affect revenue? Read on to find out.

A report by Apptentive found out that almost 8 out of 10 users review the app’s rating before they download that app on their phone. Keep in mind that In Google Play Store and Apple’s app store, ratings are displayed in search results and on app pages. Your prospective players will always see your rating, either through Search, Browse, ads, websites, or another app.

Let’s dig deeper. What happens to an app if it only has 3 stars? According to AppFollow, it loses around half the downloads, whereas apps rated 1–2 stars lose almost every download. All your optimization efforts come to be useless if your app has much less than 4 stars.

Based on a Womply study, over 200,000 small businesses were analyzed to gauge the impacts of star ratings on revenue. Here were a couple of key findings:

Another astonishing insight from Playtika during the ASO Conference 2019 in New York shows how impactful reviews can be for your revenue and your ASO. After Playtika started to respond to their game Bingo Blitz their conversion to install increased by 30%, which led to 1,500 new installs/day and brought them an additional $135k/month.

Based on a Womply study, over 200,000 small businesses were analyzed to gauge the impacts of star ratings on revenue. Here were a couple of key findings:

Another astonishing insight from Playtika during the ASO Conference 2019 in New York shows how impactful reviews can be for your revenue and your ASO. After Playtika started to respond to their game Bingo Blitz their conversion to install increased by 30%, which led to 1,500 new installs/day and brought them an additional $135k/month. 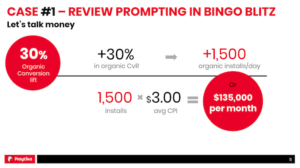 In their game Slotomania, they even achieved an average increase of +0.7 points in ratings and a 15% increase in their conversion rate – just by replying to concerns. This gave them an additional increase of $240,000 in revenue per month. 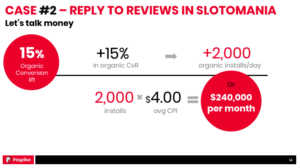 These stats confirm what most would expect – a higher star rating means higher revenue.

Interestingly, businesses with a 5-star rating earn less revenue than businesses with 1 to 1.5-star ratings. This is likely because companies with 5-star ratings have fewer reviews and could be less established due to the low number of reviews yet (who doesn’t know those hidden gems around the game store with only 70 5-star reviews?). Another reason might be the use of black-hat tactics (i.e. fake reviews) to be boosting their profile.

The Number of App Reviews and Revenue

Speaking of the numbers of reviews. Surprisingly, the data seems to suggest that the number of reviews is more important to customers than the star ratings. In the same Womply study, businesses with more than 82 total reviews earn 52% more in annual revenue than average. Those with under 82 reviews earn 15% less, and those with over 200 reviews earn nearly double in revenue.

A larger number of reviews also prevents large fluctuations in your star rating. It can boost ranking in app stores, leading to increased visibility and, hence, revenue.

How do you get more reviews? Quite simply, ask your users. You can prompt your users within your app, send out newsletters, or offer incentives. The easier you can make it for your users to review, the more reviews you’ll get.

As mentioned earlier, a significant factor that will impact revenue is responding to reviews. Responses to reviews give companies credibility and increase the trust-factor among customers. Customers are more willing to pay for an app if companies are active in their responses. According to data from Google, responding to reviews can increase star ratings by +0.7 stars. As we’ve seen, an increase in star rating generally equates to higher revenues.

But how to know what reviews to respond first?

AppFollow’s analysis of reviews content and its correlation with their rating showed that the reviews you need to reply to the first are:

What are your players talking about? Are they facing a new bug? Do they offer feedback on the newest feature you’ve implemented? You’ll find several interesting insights from your players, among them:

Consider each review as an opportunity for your game to improve and to connect to your players. They’ll be grateful to read a personalized answer from the creators of the game they love (and will likely over you a higher rating as a reward).

It’s not enough when players publish a review to you in their native language. They expect you to reply in their language. Otherwise, they either won’t understand what you say or will feel offended as you don’t go the extra mile to hire a native speaker replying to their concerns. Worse, you use the same reply over and over again throughout dozens of replies or use Google Translate or Deep L Translate and simply machine-translate your reply. Your players will notice that it’s machine-translated and will feel patronized by you. The consequences will be immediate: many players choose to change their rating to a lower one thanks to the poor experience they had with you based on your generic reply. The road to hell is paved with good intentions.

Reviews are a crucial aspect of reputation management. Neglecting your reviews can result in the best case into missed opportunities in generating revenues or in the worst into lost revenue and a damaged reputation for your app that is very hard to fix.

The first step to getting positive reviews is to know your audience. Have a quality game tailor-made to that audience and localize your game for the intended market. Here at iGlobe, we offer localization, translation services for gaming apps in a variety of different languages. We also offer customer service, community management, social media marketing, and ASO services for your app to conquer the markets overseas in no-time. Get a free audit and grow with us!